What monitors are compatible with the FM Towns?

I recently bought an FM Towns, though the tower only. Low and behold, I was in a predicament! I needed a monitor, mouse, keyboard, and gamepad - and I had none of them.

The obvious option would be to bankroll all of the official FM Towns accessories from Japan, but who wants to do that? Buying them all separately, you could easily spend $400+ after shipping. I wanted a cheaper alternative that I could buy or create her in the United States.

To start off my series of locating cheap replacements to official FM Towns accessories, we’ll look for a monitor!

The information I'm posting was researched for the machine that I have, the FM Towns F2. That being said, the information should be applicable to all FM Towns machines. I’ll try to add notes for other FM Towns computers, but I’m definitely not an expert on the newer beige machines.

Before we talk about hardware, let’s talk about the signals that the FM Towns tries to pump out of it’s connector. The FM Towns has two main output modes. The default is 15kHz RGB, though the machine also supports 31kHz for some higher resolution programs. I’ve heard people talk about the Towns also outputting 24kHz, but I can’t confirm that. 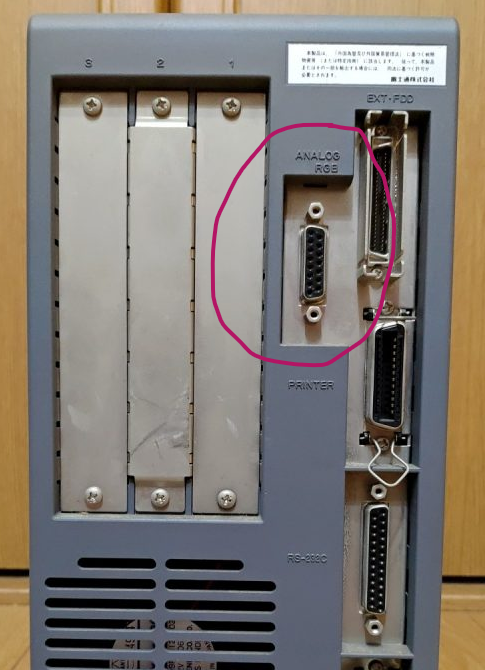 To output these wonderful display modes, the Towns uses an “Analog RGB” connector. It’s a two-row (sometimes called two-line), 15-pin D-Sub connector. In shorthand it’s commonly called the “DB15” connector, but be aware this will also bring search results for three-row 15-pin VGA-style connectors. THe good part of this? The connector has the same amount of pins as a VGA connector! This means that wiring an adapter cable to use newer monitors is easy as pie. There are great wiring diagrams on the GameSX.com Wiki for the X68000, PC-9801, and FM Towns.

Alternatively, if you don't like to solder, there ARE adapters for sale. You can find great ones on Amazon.co.jp (Thanks for the link, Matthew!). From what I've seen, as a general rule of thumb, most PC-9801 adapters will also be compatible with the FM Towns. X68000 adapters are NOT compatible.

Getting a monitor that can at least display at the most common modes - 15kHz and 31kHz - would be recommended. If you get one that also supports 24kHz, even better! The 15kHz Monitor Wiki has a list of wonderful monitors that fully support these display modes. As a general rule of thumb, almost any monitor on that list with “Full” 15kHz support should also support 31kHz, and possibly 24kHz as well.

Note: Some of the newer beige FM Towns II Fresh or Fresh FT machines also ONLY output at 31kHz, meaning a fancier Multi-Sync monitor isn’t necessary (Source for that here)

To make your life extremely easy, I’ve compiled a list of some of the “Full Support” monitors from that website, specifically those with VGA connectors. They’re sorted by the cheapest prices I could find, all the way down to the most expensive. On top of that, I’ve also included eBay links that will automatically search each of the monitor models on eBay for you! (Message me if these links break plz) If there are multiple links, it's because the monitors can be found under multiple names or terms.

If you have any feedback for this list (new additions, changes, notes) feel free to contact me! I’ll be sure to update it ASAP.

As you can see here, you can pick up a nice, thin, light, and store-able 15kHz-compatible monitor for as low as $60 shipped to your door! While the official FM Towns monitors or a similar CRT isn’t too much more expensive, it’s inherently far less store-able and useable. Heck, I have a glass desk! The weight of a 21” CRT would shatter it, no questions asked!

In addition to the monitors listed above, try testing your own! Before you run to eBay and purchase one of those known-compatible monitors, try hooking your FM Towns up to various VGA monitors around your house, or cheap monitors you can get from your local thrift store or flea market! You may find something surprising and cheap that you can add to the 15kHz Wiki (and my list as well).